As a sophomore, Aoife Sinclair ’20 has already built an impressive resume. For the past two semesters, she has taken a break from her studies to pursue internships with Sesame Street and Full Frontal with Samantha Bee. These experiences are an integral part of who she is and the career path she plans to follow. 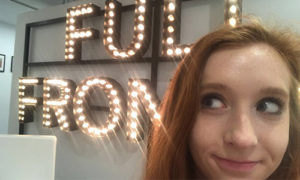 Sinclair started with Full Frontal with Samantha Bee during the fall and worked as a production intern. With the show in its second season, Sinclair was an active member of the weekly filming. She recounts, “I often got to work in the control room with the director and tech staff and witness how much communication and organization it takes behind-the-scenes to pull off a show. In the office, I spent a lot of time on research projects for the writers and researchers for segments that were being produced on the show.” This experience allowed her to sit down with the writing staff and obtain crucial feedback on her own writing style.

During her time at Full Frontal, the show was nominated for seven Emmy’s, including “Outstanding Variety Talk Series” and “Outstanding Interactive Program”. Most excitingly, “Full Frontal with Samantha Bee Presents Not the White House Correspondents’ Dinner” won “Outstanding Writing for a Variety Special”. Sinclair found this time to be quite memorable, and also enjoyed meeting celebrities like Ingrid Michelson, Javier Muñoz (who plays Alexander Hamilton in Hamilton), and, of course, Samantha Bee. 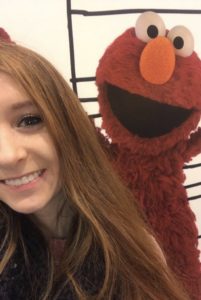 At Sesame Street, while her official role was also as production intern, it is different in that the show is currently off-season. This has allowed her to gain more experience in an office environment. With Sesame Street’s 50th anniversary around the corner, the production staff has focused on larger media projects. Sinclair is gaining valuable knowledge through casting efforts, assisting in the recording studio, making lyric videos for their YouTube channel, and attending content review sessions to assess the material soon to be released.

As a political science major at NC State, Sinclair will travel off the beaten path and use her education to enhance her passion for political satires — and the late night television shows that litter the genre. Her hopes are to one-day write professionally for a late night show in New York and to perform comedy. However, with the influence of her internships and the Park Scholarships, she intends to incorporate the philanthropic aspect of television in her long term goals.

It is largely due to her involvement with the Park program that Sinclair has taken full advantage of her time at Sesame Street and Full Frontal. “My experience as a Park Scholar is a huge part of why I am here pursuing this passion right now. Not only does the financial support relieve so much of the stress and allow me to wholeheartedly put my all into what I am doing, but I have been so supported by my Park community… that I feel I have a team behind me at all times. One of the major reasons I built up the courage to take this chance was through Park Block my freshman year where we talked so much about exploring our interests and not being afraid to change gears to pursue something that will make us happy, even though it’s tempting to stick with what you’ve always thought or what sounds safe. These discussions forced me to think about if I would truly be happy with the path I was on, and when I found the answer was no, the continued dialogue and constant support helped me to identify what path would grant me that happiness.”

Madeline Finnegan ’18 lands job with the Federal Reserve 321 Coffee: A Coffee Shop with a Purpose
Apply Give Today