Madeline Finnegan ’18, will be continuing her involvement with the Federal Reserve Bank of New York full-time after she graduates in May. In summer of 2017, Finnegan worked as a Summer Research Analyst where she contributed as part of the Financial Intermediation team. She interned with economist Anna Kovner on a research project about housing mobility surrounding the 2008 financial crisis. On a typical day, she would meet with Kovner to give updates on her work and then would be given topics to investigate. She would then spend most of the day finding answers to project questions using statistical programming software. Finnegan was also connected with other interns, full-time Research Analysts, and other visiting scholars as part of her internship. 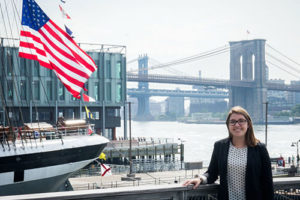 How did Finnegan find her job? “Through a LinkedIn advertisement, funny enough! As an economics major, I have been interested in the Federal Reserve and its career opportunities throughout college, but I didn’t take the plunge until I saw the ad.” With the support of an NC State professor who had worked at a branch of the Federal Reserve, she applied in anticipation of an internship that could lead her to a full-time offer.

Finnegan had an exciting summer in New York City, where she was able to explore and experience the energy of the city. One of her fondest memories was touring the New York Fed’s gold vault, which stores a quarter of the world’s known gold supply. “The Fed keeps gold here on behalf of other countries for free, and the vault is kept air and water sealed far below the ground. When I was in the vault I was able to hear the New York City Subway, and I felt like I was in Die Hard 2 (where they break into the Fed).”

Just as she had hoped, she has been offered a two-year, full-time Research Analyst position on the same team that she worked with this summer. “I couldn’t ask for a better first step after college than this.” Specifically, she is looking forward to the opportunity to determine whether research in economics is something that she wants to pursue long-term. She is excited to work with a number of economists every day, be supported as she considers applying for Economics PhD programs, and be surrounded by like-minded individuals in economics.

Finnegan is not certain what she would like to do right after her time at the New York Fed, but she hopes that in 10 years, she will have pursued a graduate degree either in Economics or Law and be settled into a job that combines economics with public policy. “I’m interested in working for the US Government in a number of fields. Being able to contribute to US economics policy domestically or internationally is something I think I’d truly enjoy.” Being a Park Scholar has given Finnegan the confidence to take a leap of faith toward the experiences that she has wanted to try but has but wasn’t sure about attempting. “I have my fair share of imposter syndrome, but my peers challenge me to see myself the way they see me. I am thankful for a community of Park Scholars that motivates me to reach farther and do more.”

Furthermore, she credits the Park program with helping her develop the pillars of scholarship, leadership, service, and character into life after college. “The emphasis of Park Scholarships on intellectual curiosity and public service have shaped my career decisions as well. While my position at the Federal Reserve will be intellectually challenging, I know that this kind of challenge brings growth, and my work will be in the service of others. I owe the highlights of my undergraduate career to the friends I made and support I received through Park Scholarships.”