Park Faculty Scholar for the Class of 2021 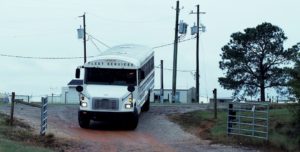 If you aren’t an animal science student, you’re not likely to make your way to this southern corner of North Carolina State University – a far ways past the swaths of co-ed development and campus enterprises.

Veering right onto Lake Wheeler Rd from the busy Tryon Rd, the landscape’s shift is startling: what was previously an awkward intersection, shaded by oak trees with cars streaming from a Food Lion shopping center now emerges a sprawling countryside, expanding in all directions. It’s the stuff citydwellers dream of – a 360-degree panorama of sky and earth, replete with ears of corn lining the dirt roads. I’m here on a rainy day, but it’s nonetheless idyllic. It doesn’t feel like the sleek and futuristic NC State you have grown to know and expect, but modern signage indicates the buildings tucked inside these fields are actually classrooms and livestock extensions. It’s unreal to me (a designer by trade and alumna by destiny) to imagine my own classes having been in this daily setting; I can’t help but conjure in my mind what might be inside these buildings. And I’m beginning to feel absurdly out of place. 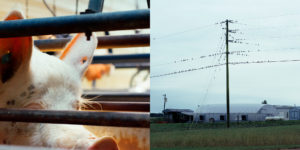 I’m here to meet Dr. Billy Flowers, William Neal Reynolds Distinguished Professor in the Department of Animal Science. I pull my Nissan Versa into a gravel drive between two pick-up trucks: one is small, with a dark blue matte paint-job; The other – tall, shiny, ‘suped-up.’ I make a note that we’re the only three here. 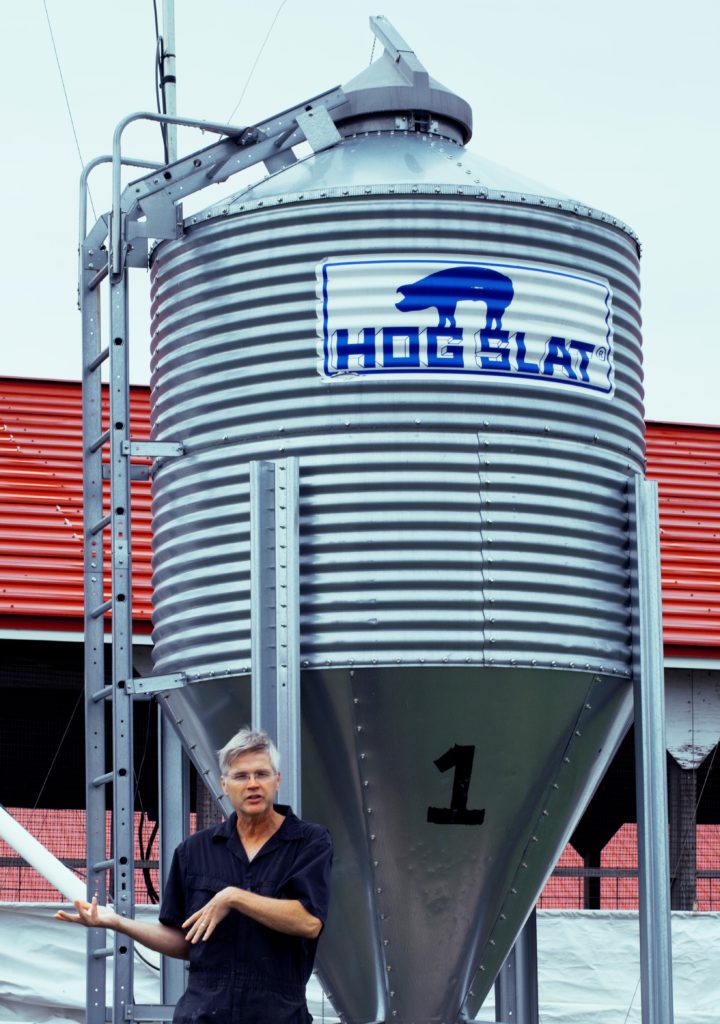 I enter through a narrow hall, its passage made even more narrow by shelves of knee-high wading boots (I’d later learn this was not the front door ) where I’m greeted by a young man in Wolfpack-themed camo who tells me Dr. Flowers (or Billy, as he is known to the Park Scholarships community) is ‘headin’ back up from the farrow farm’ but should be back any minute.

I start to make my way with my camera toward a break room and occasionally an odd clock or chair will catch my eye. Almost immediately I realize I’m looking at an object that has possibly been in this exact resting place for fifty or sixty years. I’m compelled to take a picture of a dense spider web on a fan’s pull chain when, just as the shutter releases, Dr. Flowers glides noiselessly through the open doorway. He must have ditched his footwear in that skinny boot hall and is instead opting for the indoor-friendly yet silent black coverall-black Gold toe sock ensemble. I’m startled and slightly embarrassed as he yells, “You made it!,” but I would soon gather that Dr. Flowers’ style of conversation is never intended to intimidate. Far from it, in fact. I’m just a skittish city slicker.

It’s a half hour until the two buses of students arrive from Main Campus and Flowers is ready start teaching: It appears I’ll be his first pupil. Without missing a beat, he takes a seat across the break room table and begins his lecture.

“We should have lots of baby pigs on Wednesday,” he says. “Sows have a gestation length of about 114 to 115 days and so, relative to when they are bred (usually they are bred on a Tuesday or a Wednesday), they usually have their babies on a Wednesday or Thursday…. The Wednesday lab sees babies.”

“However,” Flowers says, “we’re going to work with some of nursery pigs that were just weaned last week. The kids think they’re babies, but they are not really babies. Most nursery pigs are actually 12 to 18 pounds and some sows have 15 to 16 of those babies.”

He explains to me that this lab is one of the most introductory courses an animal science a student will take at NC State. All of the students in the class are freshmen. 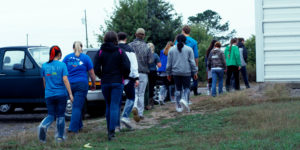 “We call it ‘150’ but it may as well be ‘101.’ Most of them have never been around baby animals,” Flowers says. “If we have a sow (mother pig) farrowing (giving birth) who needs help, we let the kids go ahead and do it. They get excited about it. They say, ‘Oh! Thank you for letting me help create life!’ and I say, ‘Oh well, you didn’t really do anything. You’re just here to help it along.’ But they get excited.”

He laughs, but goes on to fully recognize the unique position his childhood placed his adult perspective within today.

“Wednesday is mass chaos,” he says laughing. “You want them to do things right, you want them to fill out the sheet, but if a sow starts farrowing it all goes out the window.” 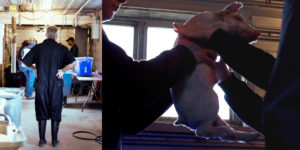 The sheet is important to Dr. Flowers as an educator, though. This day is not meant to be simply exposure. It is meant to be a guided, experiential learning activity.

“The sheet gets them in there and makes them deliberately have things to do – it has them touch the animals and interact with the animals. A lot of them haven’t had to do that before.” 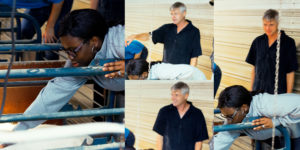 Flowers and his wife Lynn live on a ‘hobby farm’ about 50 acres in size, along with two horses, a mule, 15 chickens, two ducks, two turkeys, two guinea fowl, three goats, three dogs, four cats, 8 rabbits (half the rabbits living inside), one homing pigeon, and a number of squirrels and deer (whose of varying degrees of domesticity can most likely be attributed to Lynn’s passion for Wildlife Rehabilitation.)

He tells me they’ve imprinted the dogs on the chickens, the ducks, and the goats. He shows me a picture of a gigantic rabbit helping a small child open a Christmas present. Apparently, one of the kittens thinks one of the dogs is her mom. It’s all amazing.

The student buses are about to arrive, so we make our way outside toward the barns.

“If you see a big ol’ thing that looks like a beaver come pokin’ out of here” he says, pointing at the ground near the HVAC unit, “It’s a groundhog.. Now, the groundhogs have these burrows in the holes. If the hills are rollin’ and you’re rollin’ hay and bailin’ hay and you hit one of those holes…. you’ll flip.” There’s a huge grin on his face.

Billy is walking pretty quickly, but doesn’t miss a beat as he flips his head toward the hole in the ground and pops back up.

Turning back to look at me he says, “I guess he’s not in today.” 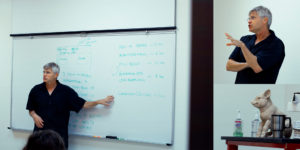 Flowers’ classroom delivery has hard edge, but he livens it with a the spirit of a story teller. It is easy to see why he would be the ideal ‘guru’ for those in a time of transition, needing flexibility but also needing clarity. He shares a deep empathy with his students, who are experiencing his field as well as their own adulthood for the first time. In his role as both professor and sage farmer, he emerges as the “swine guru” for these freshman at their first midterm – explaining agriculture in ways they can relate to at precisely this moment in time.

“Do you remember when you came to campus in August? What the first week was like when you were weaned from your parents? That’s what these pigs are going through. A week ago they were with their Mom and the world was wonderful. Now, we put them in a big room with lots of strange things, weird noises at night, and bad roommates. We’ve gotta see how they’re doing. We’ve gotta make sure they aren’t beat up and scratched.” 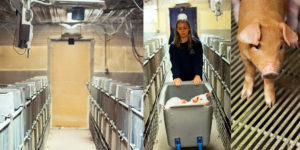 It is this empathy that immediately allowed him to get to know the students in his Park Class. Lindsey Wrege ‘21 said Flowers was the first person she met on her first day at NC State. He knew her name before she had the opportunity to introduce herself. Claire Ludwig ‘21 is an animal science major and is grateful for the relationships Flowers has helped her build in such a short amount of time. He helped her establish her Park Faculty Mentor and has connected her with student organizations and research opportunities. 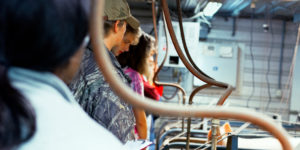 Ludwig, who is in Flowers’ Monday afternoon lab, is telling me about her dreams for research when she suddenly stops and demands my full attention.

“This is crazy,” she says. “But when we were at Freshman Retreat, he randomly climbed this giant pole and just waved hello to everybody. He climbed to the top of a pillar! I was like, what are we doing?! Who is this man?!”

She has a point. Who is this man? He ushers in life and death at an enormous scale with reverence and acceptance, yet simultaneously inspires a sense of  joy, spontaneity, and desire to learn in those who are fortunate enough to enter his realm.  I was one of the fortunate today who got to go on a trip with the “swine guru.”

As Claire so simply said, “That’s the coolest part about him: he’s a legend. He’s….The Flowers.”