Learning Lab I, an annual experience designed and implemented by freshman Park Scholars, affords students insight into leadership through the lens of a challenge currently facing the state of North Carolina. The Class of 2020 opted to explore the obstacles our state’s tribal leaders face in exercising their rights of tribal sovereignty and self-determination by discussing these topics with leaders of the Eastern Band of Cherokee Indians and the Lumbee Tribe. The class traveled to meet with both groups on their respective tribal lands—the former on the Qualla Boundary in Western N.C., and the latter in Pembroke, located near the state’s southern border.

As tribal governance and sovereignty—particularly in the context of current events—are not topics commonly addressed in mainstream media or secondary school curricula, many members of the class acknowledged they knew little about these matters before completing their pre-trip reading assignments. The leaders with whom they met spoke about challenges related to economic development, legal jurisdiction, and intertribal relations. While their Learning Lab I discussions were candid and thought-provoking, the scholars came away from the trip recognizing that they’d only scratched the surface of these complicated issues.

“When you’re an outsider it can be easy to read or hear about an issue and think, ‘Well why haven’t they tried this?’ or ‘Why don’t they just do that?’” wrote Kali Fillhart ‘20, in a class forum post. “But actually speaking with the people involved, you realize that it goes way deeper than your simple solution would ever be able to fix. That is such an important lesson when talking about leadership: there are so many things that a leader has to take into account, but oftentimes people only see what isn’t being done.”

About 30 Park alumni, parents, and family members joined the Class of 2020 for various components of this Learning Lab. Karli Moore ‘16, a member of the Lumbee Tribe and past chair of NC State’s Powwow, accompanied the freshmen for the entirety of their trip. And Cory Blankenship ‘07, director of operations for the Museum of the Cherokee Indian, helped coordinate speakers and logistics for the scholars’ visit to the Qualla Boundary. 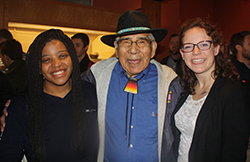 Naila Segule ’20 and Kate Speese ’20 with Jerry Wolfe, tribal elder and Beloved Man of the Eastern Band of Cherokee Indians

Individuals marked with an asterisk met with the Class of 2020 on NC State’s campus, shortly before their Learning Lab I trip.

View more photos from the Class of 2020’s Learning Lab I in this Facebook album.