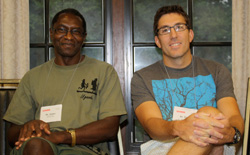 James Kiwanuka-Tondo has served as one of two Chancellor-appointed Park Faculty Scholars for the graduating Class of 2016. In this role, he and his counterpart, Derek Aday, have guided their class in developing enrichment activities and advised individual students on academic matters. Kiwanuka-Tondo’s connection with the Park Scholarships program, however, began long before the Class of 2016 entered NC State.

Truly a global scholar, Kiwanuka-Tondo completed his undergraduate studies in his native Uganda and a master’s in England before relocating to the U.S., where he earned his second master’s degree and Ph.D. from the University of Connecticut. He joined NC State’s Department of Communication in 2002, teaching courses on topics ranging from communication research methods to public relations applications and interpersonal communication. Now an associate professor and coordinator of the department’s public relations program, Kiwanuka-Tondo has also served as director of international studies for the College of Humanities and Social Sciences. 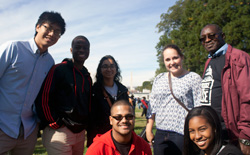 Dr. James Kiwanuka-Tondo and members of the Park Class of 2018 attended the Million Man March in Washington, D.C. – Fall 2015

Not long after his arrival at NC State, Kiwanuka-Tondo, a father of four, learned of the Park Scholarships program while assisting his daughter with her college search. He was invited to join the Park Selection Committee as an interviewer the following year, and has continued to interview Finalists for the scholarship ever since. In 2005, he expanded his relationship with the program by becoming a mentor to Park Scholars – an experience he has found to be especially fulfilling.

“These are bright students, but they also come with pillars of character, leadership, and service,” said Dr. Kiwanuka-Tondo. “You have to help them meet their aspirations. That’s an awesome honor.”

In his roles as both a Park Faculty Scholar and a mentor, Kiwanuka-Tondo is a champion of diversity and encourages his students to travel the world to deepen their understanding of other cultures. His primary area of research is health communication campaigns, with particular emphasis on HIV/AIDS. He has studied the influence of HIV/AIDS public policy statements on the behaviors and beliefs of people of South Africa, as well as on the organizations and preventive strategies to reduce HIV/AIDS in Kenya, Uganda, and Tanzania. On numerous occasions, Kiwanuka-Tondo has invited Park Scholars and other NC State students and faculty to accompany him on research trips abroad. 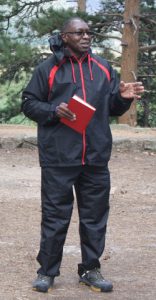 Dr. James Kiwanuka-Tondo addressed the Park Class of 2016 during their senior retreat – Fall 2015

He pointed to Austin Bryan ‘17 as an exemplar of this international experience. Bryan joined Kiwanuka-Tondo on a trip to Uganda in 2013. Upon their return Bryan, who developed an interest in using design thinking as a method to solve problems of international development, asked for Kiwanuka-Tondo’s assistance in organizing an opportunity for him to return to Uganda for further study of HIV/AIDS public health campaigns. With Kiwanuka-Tondo’s support, Bryan is now completing a twelve-month ethnographic research project examining how social contexts shape the sexual practices, expressions, and identities of individuals living with HIV in Kampala, Uganda.

As his four years as a Park Faculty Scholar come to a close, Kiwanuka-Tondo offered sound advice to the incoming freshmen. Emphasizing the depth and breadth of experiences current and past Park Scholars have pursued both on campus and through studies abroad, he urges the new students to “take advantage of the opportunities because not everyone has this chance.”