North Carolina State University’s Park Scholarships Class of 2020 presented the 21st annual William C. Friday Award to Maggie Kane on Monday, October 21 at 5:30 p.m. in the Coastal Ballroom of Talley Student Union. Maggie Kane is the founder and executive director of A Place at the Table, a pay-what-you-can cafe that provides community as well as healthy meal options. 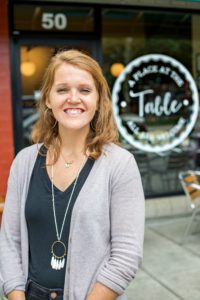 The William C. Friday Award, established in 2000, is named in honor of the late Mr. Friday, who served as president of the UNC system from 1956 to 1986. It is presented to individuals that carry on Mr. Friday’s dedication to leadership, scholarship, service, and character. The recipient of the William C. Friday Award is selected by the senior class of Park Scholars each year. Until his death in 2012, Friday himself provided input on the students’ nominees for the award. The Class of 2020 selected Kane for her commitment to the Raleigh community, fighting hunger, and combating the stigma of homelessness.

Kane graduated from North Carolina State University in 2013 with a bachelor’s in international studies. She then began working for a nonprofit with people experiencing homelessness. By befriending many people living on the margins, she knew something needed to be done. Kane has a heart to serve, a desire to always be inclusive, and a passion for loving people. Through her work with people on the streets, she realized the power of community, the importance of dignity, and the beauty in bringing people together over incredible food. In February 2015, the foundations of A Place at the Table were started, and Kane never looked back. Its doors opened in January 2018 and began serving thousands of people in Raleigh with a dignified, healthy, and affordable meal. More importantly, it’s a meal that feeds more than just the stomach — it feeds hearts, souls, and minds.