Investigating possibilities, engaging in trial and error, cultivating relationships and resources: all are skills a researcher needs to be effective. With an eye to a career in academia, Evan Brooks ‘18 has been honing these skills since his high school days.

As early as the summer after 9th grade, Brooks began shadowing researchers at Duke University and NC State through Labs for Learning and CAALS 3-D – the North Carolina School of Science and Mathematics’ (NCSSM) outreach programs. Conducting independent research as a senior at NCSSM afforded Brooks further insight into how bench research broadens society’s understanding of medicine and human health. 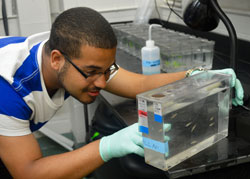 Brooks began his NC State career in the Life Sciences First Year program. Initially, he contemplated a biochemistry major in preparation for pharmacy school; however, after learning more about the various degree programs and seeking advice from Park alumnus Ian Hill ‘13, Brooks declared a major in biological sciences with a concentration in molecular, cellular, and developmental biology. He credits Dr. Nanette Nascone-Yoder, one of his three Park Faculty Mentors, with introducing him to the field of developmental biology. During one of their first conversations, Nascone-Yoder spoke with Brooks about intestinal malrotation, which occurs in one in 500 human births and can result in life-threatening complications in babies and children.

“The molecular and cellular mechanisms of normal gut development are currently not fully understood,” said Brooks. “Hearing about her research and its importance gave me a feeling in my gut – pun intended – that developmental biology was the right field for me.”

When scouting out enrichment opportunities for the summer following his freshman year, Brooks happened upon The Leadership Alliance, a national program led by NC State alumna Dr. Medeva Ghee that provides mentored summer research opportunities at 22 different institutions to students who are typically underrepresented in science, engineering, social sciences, and humanities research careers. He applied and was matched with the 10-week Building Diversity in the Biomedical Sciences program at the Tufts University Sackler School of Graduate Biomedical Sciences in Boston. 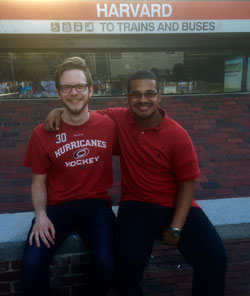 In addition to working 40 hours per week in a lab, investigating tissue mineralization defects in the fin rays of zebrafish as models for developmental deformity diseases of the human skeleton, Brooks took advantage of the opportunity to explore the city of Boston – and even met up with Ian Hill. He attended seminars about oral and written scientific communication, graduate and professional school application processes, and ethics in biomedical research.

“I also presented my research to the entire Tufts Medical School campus and was named a finalist in the program’s poster competition,” said Brooks. “At the end of the summer, I traveled to Stamford, Conn. to present my work at The Leadership Alliance National Symposium.”

While in Stamford, Brooks learned about the Annual Biomedical Research Conference for Minority Students (ABRCMS), one of the largest professional conferences for underrepresented minority students in STEM. He applied to attend, and was selected to receive a grant that covered the conference registration fee and all associated travel costs. At ABRCMS 2015 in Seattle, Brooks presented his summer zebrafish research and networked with faculty from a number of universities with strong developmental biology graduate programs.

Among the individuals with whom Brooks connected at ABRCMS was Dr. Ida Chow, executive director of the Society for Developmental Biology and its Choose Development! Fellowship program. With encouragement from Nascone-Yoder, Brooks applied for the fellowship and was recently selected as a recipient. This funding will allow him to work in Nascone-Yoder’s lab, investigating the molecular and cellular mechanisms of cardiac left-right asymmetry. 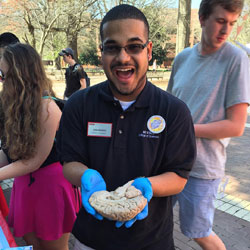 “Being selected for this program is an honor for me because I will not only receive funding to conduct research in developmental biology for the next two summers, but I will also be able to present my research at future regional and national Society for Developmental Biology conferences,” Brooks said. “Being able to do both at such an early stage in my scientific career, in my eyes, is a dream come true as I will be doing what I love and will be able to network with, learn from, and be supported by potential colleagues in my future field of work.”

Further guiding his future plans is Brooks’ desire to inspire the next generation of great scientific minds. During the Park Class of 2018 Learning Lab I, Brooks and his classmates spoke with leaders about the socioeconomic factors affecting K-12 public education in North Carolina.

“That trip was very personal to me,” said Brooks. “I come from Norlina, N.C., a small, rural town in northeastern North Carolina – an area with one of the highest concentrations of impoverished families in the state and significant disparities in educational opportunities. Being able to talk with notable leaders in our state who are dedicated to ensuring that all students are able to receive a quality education made me think about the inspiring teachers I had in Warren County and at NCSSM who have allowed me to get where I am today.” 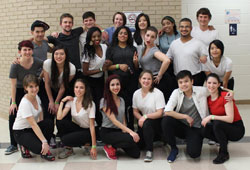 Brooks is already giving back by serving as a mentor to freshmen in the Life Sciences First Year program and the College of Sciences’ Office of Diversity and Student Services; a teaching assistant for several courses at NC State; a College of Sciences ambassador, assisting with recruiting and outreach events; and a volunteer with Homework Haven, a volunteer-based organization that provides Southeast Raleigh elementary school students homework support while improving their literacy and math skills.

After completing his undergraduate career, Brooks plans to work toward a Ph.D. in developmental and regenerative biology. He hopes to become a professor with dual roles in teaching and research, where he has the opportunity to interact with students and colleagues from a variety of backgrounds.

“Being part of such an inspiring and transformative community like Park Scholarships drives me to work hard,” said Brooks. “The mentorship I have received from my Park Faculty Mentors and alumni has resulted in amazing opportunities that I never would have thought were possible for me this early during my undergraduate career, and I have been able to make connections with passionate peers who are going to change their respective communities in their own unique ways in the future.”