From chromosomes deep in the heart of a cell to exoplanets in the farthest reaches of space, Goldwater Scholar Ana Sofia Uzsoy ’21 is doing research to help us understand the universe at every scale. 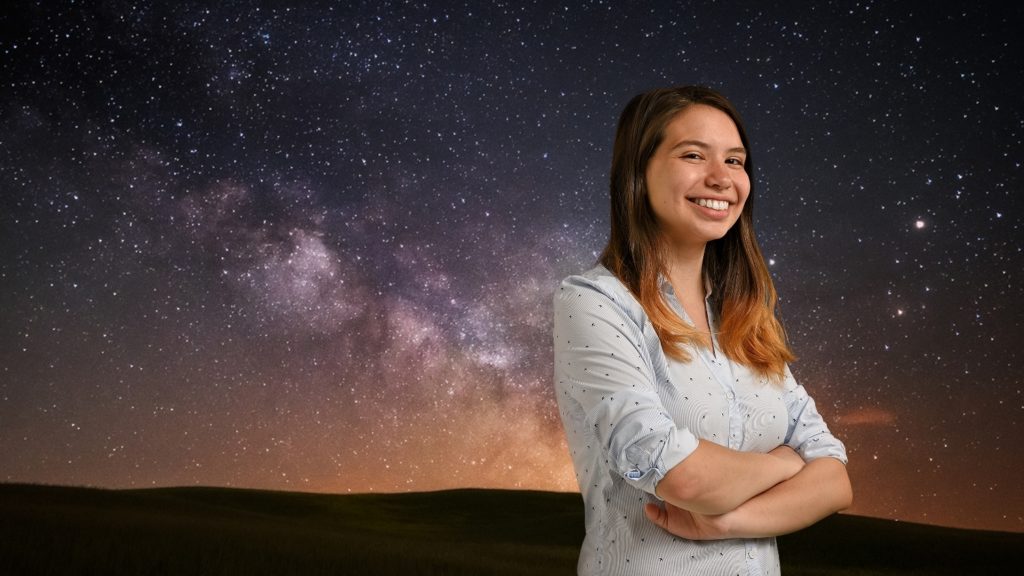 Ever since Ana Sofia Uzsoy was a little girl, she’s looked to the stars with wonderment — and ambition.

“I’ve always wanted to be an astronomer,” Uzsoy says. “I’ve always loved science.” That love led her to attend the North Carolina School of Science and Mathematics in Durham and then NC State, where she became a Park Scholar working toward a double major in physics and computer science.

Now the sophomore can add Goldwater Scholar to her growing résumé. Uzsoy learned in April that she was one of four NC State undergraduates who had won a 2019 Goldwater Scholarship, awarded to college students who intend to pursue research careers in science, mathematics or engineering. The highly competitive scholarship provides up to $7,500 per academic year to cover tuition, fees, books, food and housing.

Tracking a Cause of Cancer

At NC State, Uzsoy is doing research in the molecular biophysics lab of Assistant Professor Mary Elting ’07 to advance our understanding of what makes cells divide improperly. Uzsoy has developed computational tools and image-analysis techniques that automatically track the length of the mitotic spindles that form during cell division. These spindles push the dividing cell’s chromosomes outward into the newly formed daughter cells to ensure that each one gets a full copy of the original cell’s DNA. When errors occur during this process, a host of serious problems can result.

“Faulty cell division causes a lot of different health issues — cancers, for one thing, but also miscarriages,” Uzsoy says. “So if you could narrow down where the faults are occurring in the cell-division process, that would help you develop gene therapies to fix or prevent them.”

Uzsoy found her way to Elting’s lab as a result of a high school research project she did on astrobiology — the study of whether life exists, or could exist, elsewhere in the universe.

“I studied whether microbes could survive the ultraviolet radiation present on the surface of Mars,” Uzsoy says. “Earth has an ozone layer that protects us from a lot of harmful radiation, but Mars doesn’t. That’s one of the biggest hurdles we’ll have to overcome if we’re ever going to figure out how terrestrial life could survive on Mars.”

During the two years Uzsoy spent working on her Mars project, she learned a lot about biology research protocols, which made her a natural fit for Elting’s research at the intersection of physics and biology.

She hasn’t forgotten her interest in celestial bodies, however. In the summer of 2018 Uzsoy participated in a Research Experience for Undergraduates in astronomy at the University of Chicago under Assistant Professor Leslie Rogers, studying ultrashort-period exoplanets.

“An exoplanet is any planet outside our own solar system, and an ultrashort period is when that planet makes a complete orbit around its sun in less than one Earth day,” Uzsoy explains. “So all the planets we studied are really close to their host stars, and they’re moving really, really fast. It’s an interesting subpopulation of exoplanets because we don’t know how they formed, although there are a number of theories about it. I worked with Dr. Rogers to analyze exoplanet data captured from the Kepler space telescope so we can start to whittle down those theories and see which ones work best.”

When the summer ended and Uzsoy returned to NC State for her sophomore year, the exoplanet research project wasn’t finished yet, so she has continued to work on it remotely. Mind you, this is on top of pursuing a double major, minoring in music, playing oboe with the NC State Woodwind Quintet and serving as a College of Sciences Ambassador.

A student like Uzsoy obviously could have earned admission to lots of good universities, and she did — so what made her choose NC State?

“Really it was the Park Scholarships program,” she says. “That’s how I met Dr. Elting. I had gotten into NC State, and they offered me a Park; but I’d gotten into some other schools too, so I was weighing my options when Dr. Elting called me. She got her bachelor’s degree from NC State, and she was a Park Scholar too, so we had a lot to talk about. I looked up her research and liked what I saw, and that kind of sealed the deal.”

She says her time in the Park Scholarships program and at NC State has been wonderful.

“It’s been a really good fit,” she says. “All my mentors have been amazing. I’m really grateful to them for helping me come out of my shell, and teaching me how to do good research and present it to others.”

For graduate school, Uzsoy intends to pursue a Ph.D. in computational astrophysics. And after that?