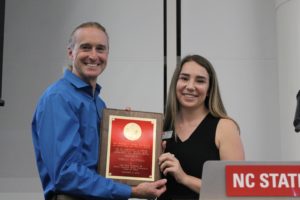 The William C. Friday Award, established in 2000, is named in honor of the late Mr. Friday, who served as president of the UNC system from 1956 to 1986. It is presented to individuals that carry on Mr. Friday’s dedication to leadership, scholarship, service, and character. The recipient of the William C. Friday Award is selected by the senior class of Park Scholars each year. Until his death in 2012, Friday himself provided input on the students’ nominees for the award. The Class of 2019 selected Sanford for his commitment to youth and community empowerment, sustainable development, and juvenile justice.

Sanford holds bachelor’s degrees in biology and chemistry from UNC-Chapel Hill and a master’s degree in social work from Virginia Commonwealth University. Before founding GrowingChange, Sanford worked as a licensed clinical social worker, providing mental health treatment to youth and families served by the Department of Juvenile Justice in Scotland, Hoke, and Robeson Counties. Today, he demonstrates his dedication to empowerment by involving local youth in these prison renovations—challenging them to rewrite their communities’ historic narratives of incarceration. Sanford’s work has garnered significant regional, national, and international attention, including the Open Society Foundation and the Ashoka Fellows, the NC Rural Center where he was named the 2017 Rural Leader of the Year, and Young in Prison, an international NGO.