Kobi Felton ’18 was recently named one of the 43 recipients for the 2018 Marshall Scholarship. Awarded to US students with strong “potential as scholars, as leaders, and as contributors to improved UK-US understanding”, Marshall Scholarships are recognized as one of the most distinguished scholarship opportunities available nationwide. 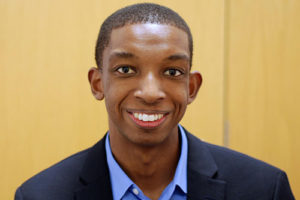 Felton decided to pursue the scholarship after he discovered the UK’s strong foothold in flow chemistry, his main field of interest. Currently a chemical and biomolecular engineering major, he will use the two-year scholarship to pursue a master’s degree in chemical engineering at the University of Cambridge, followed by a master’s degree in nanomaterials at Imperial College of London.

In the long run, Felton hopes to one day found a startup “to make chemistry research more efficient, affordable, and accessible through a cloud laboratory.” He finds that many researchers are spending upwards of half of their time in the lab on “repetitive, error-prone tasks such as pipetting and weighing.” He continues, “with the cloud laboratory, that figure will drop to nearly 0. The idea is that a researcher will specify a procedure via a website. Then, that procedure will be executed using automated flow chemistry in a remote facility. Finally, the data will be returned to the researcher via a website and the products mailed back for further experiments. I’m actually working on a version of this idea with two other Parks for my Entrepreneurship senior design project, and I hope to make it a company in the future.”

According to Felton, “the support provided by Park Scholarships has helped me develop as a leader and a scholar. Completing the Plan of Professional Development (PPD) annually has helped me make conscious choices about my career path. Every year, my PPD evolves as I gain more perspective from Park events, internships, and my classes. For example, during our Learning Lab II trip to Washington D.C., I was inspired by several Park alumni who were advisors to congressional representatives. During the next PPD cycle, I reconsidered my upcoming classes and decided to take a political science elective, which ended up being one of my favorite courses in university. The rich ecosystem of opportunities provided by the Park Scholarships and the [chance] to reflect on those opportunities has been central to my development.”

When reflecting upon the whole of his experience throughout the Park program and at NC State, Felton finds there are many memories to highlight how impactful the Park program and community has been on his development. From freshman retreat to serving as Academic Excellence Chair for the NC State chapter of the National Society for Black Engineers to discovering flow chemistry and joining the laboratory of Dr. Abolhasani in the Chemical Engineering department, the Park gave Felton the opening he needed to discover all that NC State and the world has to offer.