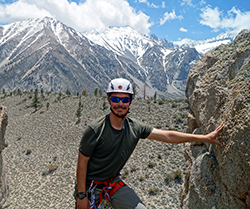 Daniel Snyder ‘12 in the Sierras, learning to set up outdoor rock climbing – 2015

While his undergraduate degree is in biological engineering, Daniel Snyder ‘12 has opted to pursue what he calls a “supremely unconventional (and unexpected)” career path. For the past four years, he has tested and grown his leadership skills by running Discipleship Training School programs throughout New Zealand and Southeast Asia.

“As I approached the end of my senior year at State, something inside me told me that it wasn’t time for to move ahead on the traditional American life path of getting a career, making money, settling down, getting married, etc.” said Snyder. “I don’t even remember making a conscious decision, but a few months from graduating my heart was set on going on an adventure—something that would involve both traveling the world and deepening my relationship with God.” 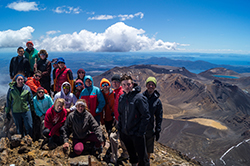 Snyder planned to participate in a five-month Discipleship Training School course in New Zealand and then return home. But through this experience his “world was blown open wide,” and he soon found himself coaching others through their journeys.

Discipleship Training School (DTS) is the core training program of Youth With A Mission, the largest Christian missions movement with more than 1,100 locations worldwide. DTS operates in two phases: during the first phase, students live, learn, worship, and serve together while receiving one-on-one mentoring; during the second, students put into practice what they’ve learned through team-based outreach, typically in a nation other than their own.

As a member of the Training Leadership Team, Snyder has staffed or led six DTS courses, conducting outreach in Cambodia, Nepal, the Philippines, Thailand, Vanuatu, and his home base of recent years, New Zealand. He especially enjoyed his experiences in the South Pacific island nation of Vanuatu, and as a participant in the School of Outdoor Adventure Recreation in California’s Eastern Sierra. The latter afforded him the foundation in outdoor leadership he needed to pioneer the Pilgrimage DTS, which integrates wilderness backpacking into both the lecture and outreach phases of the course. 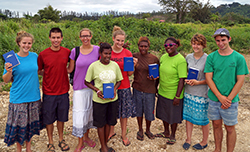 In his role, Snyder spends significant time training and mentoring other young people (aged 18-35) in a holistic way so they, too, can emerge as leaders. He works closely with his students, helping them to grow in leadership ability, confidence, responsibility, compassion, humility, faith, as well as develop practical skills such as financial management, logistical planning, and conflict resolution.

“Being at NC State as a Park Scholar set me up for this,” Snyder said. “I get to bring a level of professionalism and excellence to the organization I work with that really contributes to our positive impact. But in the last four years I have been challenged constantly and learned an incredible amount about being a transformational leader, not just a transactional leader.”

Snyder is open about the obstacles he’s faced as he has taken on increasingly complex leadership roles—namely, achieving a healthy work/life balance. He also acknowledges that working for an entirely volunteer-run organization requires both a special kind of dedication and comfort with ambiguity. He strives to find balance through hiking, running, going to the beach, watching movies, and photography, and recently began selling postcards and greeting cards featuring his photos of the New Zealand landscape. 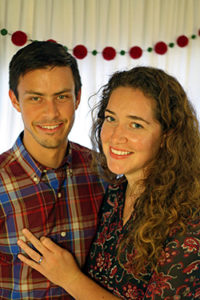 Daniel Snyder ‘12 with his now-wife and fellow Youth With A Mission volunteer, Desirée – 2016

Although he does not often apply the field-specific skills he acquired as a biological engineering major, Snyder calls upon the larger themes of his studies daily.

“I am constantly using the approach to problem solving, organization, and logistics that I gained in my degree program,” he said. “I have a feeling that more technical side of me will come back into play in various ways in the future, possibly through involvement in community development.”

Reflecting on his own time at NC State, Snyder offered useful advice for current Park Scholars.

“Don’t lose yourself in the demands of academia (or even extracurricular activities) and miss out on good quality, trust-filled relationships,” he said. “These kinds of relationships take work (and transparency and vulnerability and perseverance and forgiveness and selflessness…), but there is nothing that will enhance your life and change you for the better than true friendship and community.”